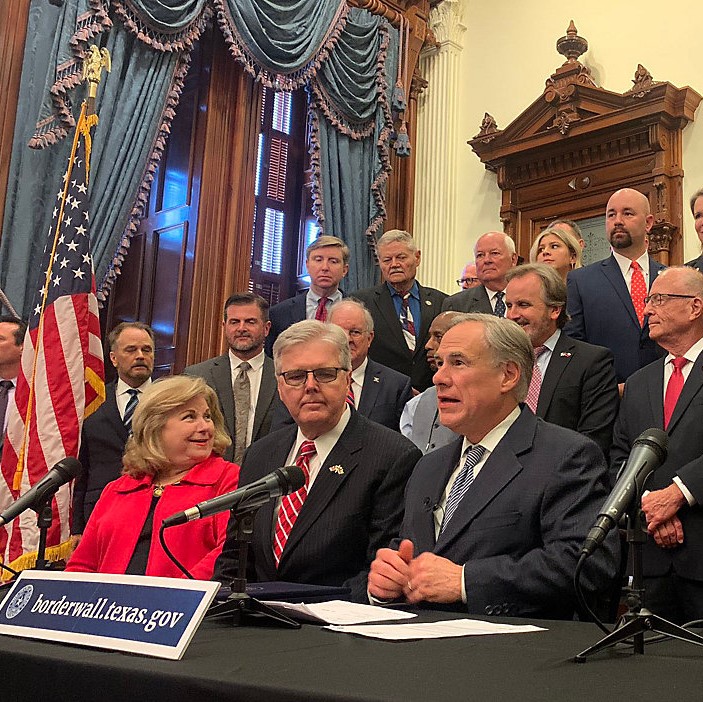 I joined Governor Greg Abbott and my Republican colleagues to discuss the crisis at our southern border.

For years, Texas has picked up the slack of the federal government. This session, the legislature appropriated $1 Billion to border security, because Washington, D.C. refuses to act. Since 2014, Texas has dedicated $4.3 billion of state tax dollars to border security. It is not right that Texas taxpayers have to make this investment, but the safety of our citizens and communities is at stake.

Since Biden took office, his open border policies have been disastrous for Texas. Border crossings are at an all-time high, the cartels are infiltrating our cities, and once peaceful border communities are seeing increased crime and vandalism.

Over the last few months, Operation Lone Star has revealed the true nature of this crisis. Department of Public Safety officers and the Texas National Guard have made over 1,500 arrests, over 5,000 apprehensions, and infiltrated trafficking and smuggling rings.

But in May alone, U.S. Customs and Border Patrol said it caught 180,000 migrants crossing into the United States. The full southern border is 1,954 miles, however, 1,254 miles, over 60% of the border between the United States and Mexico is here in Texas. The feds have not given specific numbers, but if we did some simple math, of the 180,000 illegal crossings, 108,000 would be in Texas. Annually, that would amount to nearly 1.3 million undocumented persons in Texas. 1.3 million more people– putting pressure on our law enforcement, first responders, electric grid, and natural resources. There will always be legal pathways to enter our country, but Texas cannot afford this.

Because the federal government has left us no choice, Governor Abbott has declared a disaster in 24 counties, and committed to finishing President Trump’s border wall. In today’s press conference, he announced a $250 million down payment on the wall and demanded that President Biden return Texas’ land that was allocated for the border wall.

More must be done, and more will be done. We will not stop until the border is secure, and our communities are safe, even if the federal government continues to ignore this crisis. Today is a strong step forward to ensure that Texas protects Texans.