We must stand against hatred 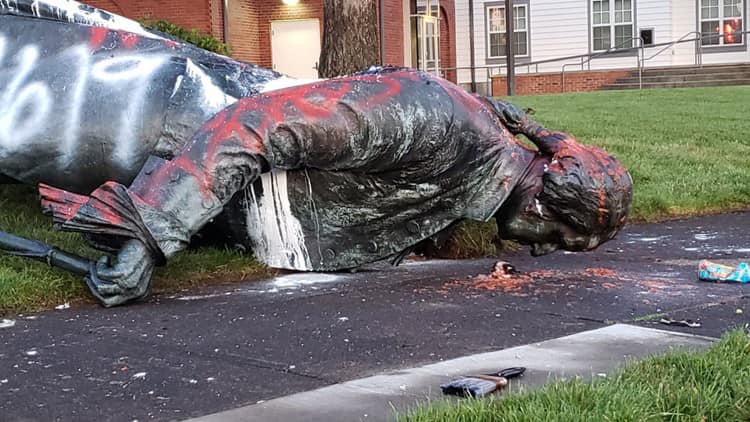 The picture below is a statue of George Washington that was desecrated by a mob in Portland, Oregon. As you read this, a statue of President Andrew Jackson across from the White House is being guarded 24 hours a day so it is not destroyed. Last night, in Madison, Wisconsin, violent protestors pulled down a statue of Hans Christian Heg, a noted abolitionist who died as a Union Army soldier during the civil war— the protestors caught a state Senator recording them and attacked him. I am a firm believer in every American’s first amendment rights—but these are not peaceful protests—they are criminal acts.

These instances aren’t just happening in blue states—in Huntsville, Texas, a Texas marker honoring Freedman George Washington Grant stolen and hauled off. Even Stevie Ray Vaughn along Lady Bird Lake in Austin was vandalized…. This all goes to show that these events are not part of a civil justice movement— they are violence and vandalism, plain and simple. I won’t stand for it.

Last year, I spearheaded the effort to protect historical monuments in Texas. My bill protected Texas history—permanently protected the Alamo Cenotaph, required public input and a vote by the city council or legislature before any monuments are relocated—preventing one rogue actor from making a decision that should be made by citizens. The bill passed the Texas Senate, but was never brought for a vote in the Texas House.

Day after day, historic monuments are being trampled by mobs. Mayors are unilaterally removing statues that have been an educational source for generations without any of their constituents getting a say. This is not right, Teddy Roosevelt is too offensive? What is next? Will we bulldoze Mount Vernon and Monticello or remove the Washington Monument from the National Mall? Will we sit on the sidelines and let the Alamo Cenotaph be moved off the Alamo battleground? Will we allow cities to auction off historical monuments for their own gain like Dallas?

Will you stand with me? Will you help me fight to protect our history? This week I will be asking President Trump and Governor Abbott to issue executive orders at the federal and state level to protect historic monuments–or consider activating the National Guard to patrol monuments as Wisconsin and the feds have done. I look forward to leading the fight in Texas. Whether we like our history or not, it makes us who we are, it forces us to learn and discuss our heritage. I will not stand by as angry mobs demolish Texas history and I hope you’ll join me.